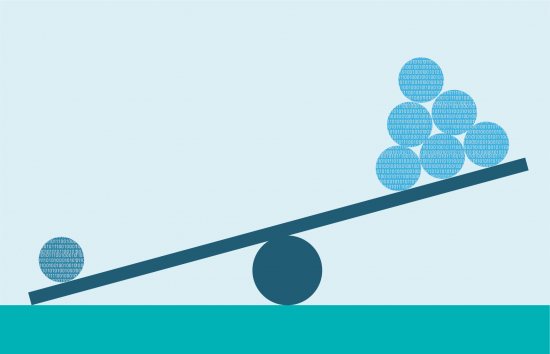 What is “data imbalance”?

Predicting a highly probable event with sufficient amount of data is not a challenge for a sufficiently skilled Data Scientist. However, the reverse of this is challenging, especially concerned with algorithm performance in the presence of underrepresented data and severe class distribution skews.

Data imbalance is independent from the domain, that is to say, it doesn’t matter if you are trying to detect an extremely rare disease, predict an aviation safety event or detect fraud. If there is not sufficient examples of every class the data will “lie” to you.

Take this illustration: one naive Data Scientist decides to apply a go-to data mining technique to determine if extremely rare events occur (e.g. a binary classification based on a Random Forest). He effortlessly develops the model and is pleased as he observes that it yielded an accuracy of 99,99% with this plain and straightforward procedure.

If the Data Scientist is not as naive as we thought, he might analyse the output and observe that the predicted labels are “0” regardless of the input. Over 99.9% of the samples in the dataset won’t represent the rare event, because of this any classifier would yield a extremely high accuracy just by never predicting the event.

In order to achieve meaningful results in a data mining methodology, and especially in classification tasks, it is mandatory to work with a balanced distribution of data that supports equals costs of misclassification (i.e. predict the “wrong” class). At the end, it is essentially all about the amount of points belonging to the minority class (the event occurring) being far smaller than the number of the data points belonging to the majority class (the event not occurring).

How is an imbalance presented in your dataset?

An imbalance can be found in different forms within a dataset:

Class imbalance is a common problem in datasets from multiple well-known domains. It’s a problem than can lead to an erroneous accuracy and incorrect conclusions. Due to the heavy repercussions of this, any skilled Data Scientist should identify and tackle class imbalance. If you want to find out how to tackle these problem using different methodologies such as sampling, cost-effective learning or kernel based algorthims read on to part 2 of this series of posts.

V. García, J.S. Sánchez, R.A. Mollineda, On the effectiveness of preprocessing methods when dealing with different levels of class imbalance, Knowledge Based Systems 25 (1) (2012) 13–21.

A common approach is to sample the datasets to modify data distributions to create a “new” balanced dataset. Data re-sampling is commonly used in data science to validate machine learning (ML) models…

But what if, instead of trying to balance the dataset, the imbalance problem is tackled from a different perspective? Since the usual problem with imbalanced datasets is that there is very low occurrence in some classes…