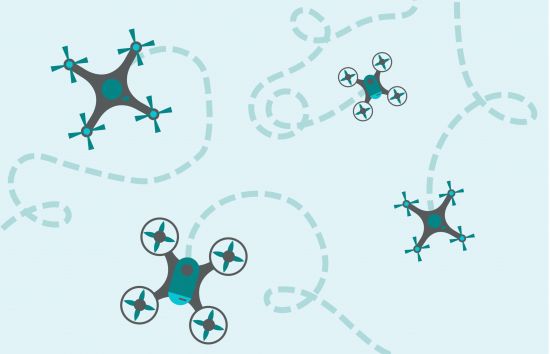 The role of AI in drones and autonomous flight

For today’s post, I wanted to try and bridge two of the hottest topics in today’s technological revolution: AI and Autonomous systems.

The term “Drone” has been massively overused; most of you have surely seen it time and time again in news and media articles. This term can range from small and cheap hobby aircraft available at Amazon all the way to multimillion weapons systems used on battlefields. At the moment, the most formal and internationally accepted term used to refer to these devices is RPA (Remotely Piloted Aircraft) and RPAS (Remotely Piloted Aircraft System). Despite this, RPA tends to be used to refer to more complex aircrafts (not your typical DYI drone) that, in many cases, require a special pilot license or at least special training. The term RPAS includes not only the vehicle itself but also the ground control station, telemetry and communications systems, launch and landing equipment, sensors and other possible hardware and software used in the operation. UAV (Unmanned Aerial Vehicle) and UAS (Unmanned Aircraft System) are terms virtually equivalent to those of RPA and RPAS. UAV and UAS are terms that are in a rapid decline in use relegated mainly to use in the defense industry. There is no official designation for autonomous aerial vehicles; they are generally referred to and included in the term UAV/UAS. For simplicity’s sake, I will use the term drone (like every news outlet) to refer to both unmanned piloted and autonomous aerial vehicles.

AI’s use in drones

There is no denial that AI has had a worldwide impact in society. There are nearly no industries that have not been revolutionized in some way or another by AI. The aviation industry is no exception. Although they might seem fairly new, the truth is that the first use of drones dates all the way back to the First World War. Only until now, thanks to a variety of factors (including cheap and reliable materials and power sources, efficient and safe batteries, improved control units and high connectivity systems) has the drone market really taken off.

Current day drones generate massive amounts of data so it was only a matter of time that AI would be thrown into the mix. But what exactly does AI offer to drones? The key word here is autonomy. There are different levels of autonomy ranging from “no autonomy” all the way to “full autonomy” in all cases. Here we are not going to enter the debate into what level is achievable today and use the term broadly to refer to systems that require no human input in the operation. There are 4 basic key components of autonomous flight:

We will start with how AI can help in State Estimation and Control problems. AI has proven more than capable of helping optimize and enhance drone control especially in unstable and aggressive environments. Classical control and state estimation techniques have limited effectiveness as they tend to only be optimised for approximate mathematical models of the drone and not real operational data. AI and ML algorithms have proven their usefulness in learning from experience and making drones state estimation and control capabilities adapt to changes (e.g. broken propeller) or to the environment (e.g. wind gusts or rain). One proven use of AI is helping find optimal values for PID controllers to provide better performance in extreme situations. Complex neural networks such as CNN or RNN have also been used to better handle changes in systems, deteriorations, possible uncertainties and perturbations for favourable tracking performance for the motion control of drones.

The ability to map and gain awareness of surroundings is another key factor contributing to a drone’s full autonomy. Currently, you can find drones equipped with high tech mapping systems such as electro-optical, stereo-optical or LIDAR. Modern mapping sensors are very good at generating high fidelity mappings of surroundings, but their weight or price can sometimes be a limiting factor. Here, AI’s major impact is Computer Vision algorithms (CV). Nowadays, it is easy to find lightweight, high-resolution cameras at a relatively cheap price. Combining these cameras with state-of-the-art CV algorithms can improve mapping capabilities and situational awareness to practically any drone at negligible costs. Aerial-mapping using drones and CV algorithms is an increasing business in many different industries. The main drawback to CV algorithms is the large amount of data and examples needed for its training.

Finally, real-time path planning and posterior navigation is one of the most challenging and fundamental aspects of real, autonomous systems. Once the drone knows where it is and where it wants to go (Mapping), it now needs to find the way to get there in the safest and most efficient manner possible. The use of deep neural networks such as reinforcement learning have been used to develop effective, real-time planning as well as to create simultaneous multi-drone cooperative planning. AI has also had a big impact in collision avoidance. In the past, many classical collision avoidance systems relied on the very expensive LIDARs or RGB-D Cameras. AI algorithms have helped provide cost-effective collision avoidance solutions for many types of drones. Researchers from the Carnegie Mellon University and the Graz University of Technology were able to, through the use of cheap cameras, CV algorithms and state-of-the-art imitation learning techniques, safely navigate a drone through a forest.

Problems and limitations with drones

As most of you may have already seen, the misuse of drones can pose various risks. Commercial aviation is especially sensitive as demonstrated by the events in London and Madrid, where the improper use of drones provoked the closing of major European airports.

There are currently limitations and problems for both public and private drones. The first and main one is government regulation, or more precisely, the lack of adequate regulations. In many cases today, technology has evolved quicker than its corresponding regulation; drones are no exception. Affordable, high-efficiency drones entered the market and began to be widely used before regulators could react. Although great efforts have been made in many cases, there is still a lack of comprehensive and useful regulation framework that safely regulates the use of drones while not hampering their integration. Both the FAA in the US and EASA in Europe have introduced regulations with varying degrees of effectiveness.

The second biggest limitation is in safety. Drones don’t get along very well with planes. Regardless of their negligent use, drones have difficulty recognizing, communicating and avoiding other aircrafts or objects with the same degree of safety as manned aircrafts.

Security is another big issue. Current drones have big vulnerabilities, such as hacking or GPS-jamming, that can jeopardize their operation and turn them into potential hazards. Also, the increasing use of drones in illegal activities that, in turn, exploit current weaknesses in defenses, poses a high risk threat.

Finally, another problem that may be less apparent is privacy and nuisance. Drones provide a new point-of-view which, in many cases, can intrude our own privacy. With a constant increase in the number drones (flying cameras) sold, there has been an increase in the number of privacy concerns raised the public. Special regulations are needed to protect people from possible unauthorized and abusive drone surveillance.

It is undeniable that both AI and drones have come to stay. Many industries such as agriculture, construction, logistics or emergency services are betting on the use of these new technologies. AI has proven to have huge potential benefits for drone systems, especially when talking about autonomous systems. AI has leveraged the huge amount of data produced by these systems to enable the existence of more effective, robust and precise decision-making drones. Needless to say, all these benefits come with potential risks, such as ensuring a Trustworthy AI or the need of new regulatory frameworks, that surely need to be tackled before introducing more widespread use of drones and autonomous systems. Hope you enjoyed this blog and for more amazing and interesting blogs about data science and the aviation industry, visit datascience.aero