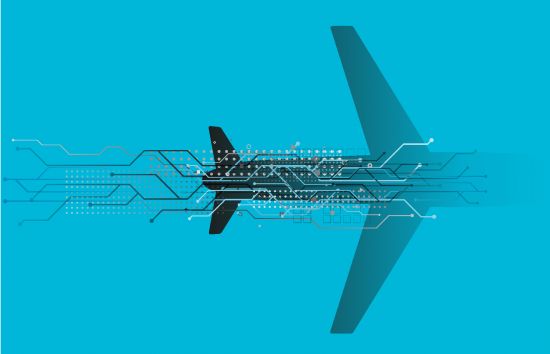 A.I. in the Cockpit: Fact or Fiction?

Nowadays, it is not uncommon to see mainstream content related to AI in cars. Despite some lingering skepticism, it is generally accepted that, in the near future, we will be sharing our road networks with autonomous cars and taking a backseat as passengers. Other transport related industries such as Railways and Shipping companies have long seen the potential of putting AI in charge, not only for economical reasons but also for increasing safety. France’s railway operator (SNCF) wants to start having autonomous trains on its railway network by 2023. In contrast, in the aviation industry, despite outstanding advances in automating certain tasks, the possibility of an autonomous airliner seems very far away. There are big critic sectors among pilots and aviation authorities as well as a generalized distrust in the public in letting a computer fly the plane. Is there space for AI in the future airliner cockpit?

Modern airliners are equipped with advanced software that automates mostly repetitive low cognitive demand procedures. Systems like the autopilot or autothrottle, in addition to others, do not only take workload off the pilots, but can basically fly the plane for the greater part of the flight. Apart from takeoff and landing, which require more active intervention of the pilots, modern aircrafts fly nearly completely on their own. Some airliners are equipped with software that is even capable of managing flight through severe turbulence completely autonomously. Most of present day commercial operations could be summarized as: letting the aircraft fly by its own until something odd happens and requires a human touch. These edge situations are where today’s systems are not capable of fully taking control. This is due mainly to the fact that systems do not rely on AI algorithms but on predefined fixed aerodynamic models that determine how the aircraft should operate.

What challenges lay ahead?:

As mentioned before, the mayor challenge of future AI systems in the cockpit is tackling these edge cases. These edge cases can be especially difficult to identify and understand due to the fact that they tend to be situations never before experienced. This can be a great challenge as AI models learn from data and are only as good as the data they get.

A good example of what could happen when working with bad data is the Lion Air 737 Max that crashed in October 2018. Although the investigation is still ongoing, one of the preliminary reasons for the crash that it is being investigated is faulty data from the sensor. Authorities believe that one of the angle of attack sensors was feeding the MCAS faulty data, making it think the aircraft was going to stall. The MCAS then proceed to dive the plane in order to gain speed and avoid the stall. Lack of training and familiarity of MCAS among the crew also contributed to the crash.

As another example, in 2009, Air France flight 447, an Airbus A330, stalled and crashed in the Atlantic Ocean. The crash occurred after an inconsistency between the airspeed measurements (IAS) due to ice crystals obstructing the aircraft’s pitot tubes, a previously unseen situation. This inconsistency made the autopilot disengage and switch to an alternate mode also unfamiliar to the crew. Unfortunately, they incorrectly assessed the situation and focused their attention entirely on airspeed inconsistency. Without following the correct procedures for IAS inconsistency, they decided to rise the nose of the aircraft. The A330, similar to the 737 Max, is equipped with a non-stall system, but the crew was unaware (Mode Confusion) that said system disconnected due to the computer having switched to an alternate mode. Ultimately, the aircraft did enter into a stall due to the steep climb and did not recover.

From these two recent crashes, we can extract two main challenges for AI autonomous aircrafts, with the first being technical. Both accidents mentioned started off with incorrect data provided by different sensors. Again, AI is only as good as its input data. Sensors fail and can be defective, so we should assume some bad input data as a principle. Therefore, the AI needs to detect both when a sensor can malfunction and when this could be the sign of some major problem. This is one of the biggest, current obstacles of AI. Humans are still needed in edge case situations because, as humans, we have the distinct ability to create accurate cause-effect models of how something works. We have common sense knowledge that can be applied in making reasoned logical inferences that, in many cases, leads to the solution of a previously unseen problem.

The second challenge for AI autonomous aircrafts is understanding and reviewing how automation affects pilot abilities. Until we achieve fully autonomous aircraft, humans and AI are going to share the cockpit. As seen in recent accidents, pilot abilities have been posited to have degraded dangerously low due to automation. Although they still go through rigorous training, pilots nowadays rarely take manual control of the aircraft during a flight – only a couple of minutes during takeoff and landing. This problem is worsened by, as many studies suggest, the fact that, as pilots are not involved directly with the operation (more monitoring role), they can lose track of what is happening and what the aircraft is doing. This may influence a pilot’s ability to react when a problem rises. The accident of Air France 447 is a great example of these challenges: the captain had logged in the past 6 months 346 hours from which only about 4 hours was he actually in control of the aircraft; when the autopilot disengaged, the crew had problems identifying its cause and were unaware that the alternate mode meant full control of the aircraft, meaning they could induce a stall by rising the nose of the aircraft too much. No one argues that automation benefits aviation safety, but many organisations have stated that changes need to be made to crew training. Many have emphasised the need of crews to maintain the ability to fly the aircraft manually in any phase of the flight in addition to better understanding of the systems the aircraft is equipped with, how they work and what can they do.

One last challenge that should not be underestimated is the willingness of passengers to fly a pilotless plane. A recent survey by UBS investment bank to 8000 peopled revealed that 54% of surveyed people answered they would “unlikely” board a plane without a pilot, with only 17% “likely” to do it. Although this seems like a major challenge, results also show there are big differences between groups of people. The survey shows, as some other studies made by Embry-Riddle Aeronautical University, that young people tend to be more prone to the possibility of flying in an aircraft without a pilot as well as people who are more familiar with AI technology. Despite being a current challenge, many experts suggest that, in the long run, more people will be willing to fly in an autonomous plane. This is due to the fact that today’s society is evolving towards one greatly focused on technology and science with people more and more accustomed to AI in their daily lives.

Although as we have seen strong challenges ahead, both airlines and manufacturers are keen to pursue the full automatisation of the cockpit. For airlines, this could be a solution to the pilot shortage expected in the near future. As traffic demand increases, both Airbus and Boeing predict that about 500,000 new pilots would be needed by 2035. Airlines look to AI as a possible solution to this problem. UBS investment bank calculates that pilotless aircrafts could save the airlines more than €30 billion and passengers could see a reduction of about 10% on fares. Airbus’s new A350 XWB has 50,000 sensors and collects daily about 2.5 terabytes of data. This huge amount of data has led manufacturers to believe in the possibility of introducing AI systems onboard. Both main manufacturers, Boeing and Airbus, have started to work on a pilotless aircraft projects. In addition to addressing pilot shortage, pilotless aircrafts could also obviate the cockpit, allowing a complete redesign of the front of the aircraft to be more aerodynamic, which could save even more money. NASA’s project Learn-To-Fly looks to develop software for real time self-learning aircrafts. The objective is for the aircraft to learn and develop its own aerodynamic model through data from its sensors rather than developing a fixed, predetermined one. Although they argue this is not AI, they believe it is a first step and building block for future autonomous aircrafts systems. Top universities around the globe are also conducting research to solve complex problems in aviation using AI, such as conflict avoidance, or even trying to learn by imitating a human pilot. Finally, the likely next great step is the removal of the copilot in the cockpit by AI. Although AI is still not mature enough to fully replace a crew, it is certainly believed that it is more than capable of aiding a pilot enough to forgo a copilot. In the video below, we can see a robot-armed pilot developed by Aurora successfully landing a simulated 737. This project, in addition to similar ones like DARPA’s ALIAS (Aircrew Labor In-Cockpit Automation System), is not focused on removing the human from the cockpit. It aims to achieve a new type of AI autopilot that provides an increased level of assistance to the crew task so as to reduce the number of pilots needed.

Though automation has long been a part of aviation technology, recent improvements in AI technology may inspire a revolution inside the cockpit. Despite many critics and challenges, there is no doubt that automation has improved safety to record levels and continues to provide the pathway to the next level of safety. As for now, there is no doubt that pilots are not going far, whether with new improved autopilots or with robotic-copilots: there will still be a human in the cockpit. But, one day, we may be more of inconvenience to autopilot than helpful aid. There is a joke that goes: “In the future, the cabin crews will be comprised of a pilot and a dog. The pilot will be there reassure the passengers and feed the dog. The dog will be there to bite the pilot if he tries to touch anything”. I hope you have enjoyed this blog and don’t forget to read more amazing blog posts on AI, data science and aviation at datascience.aero.