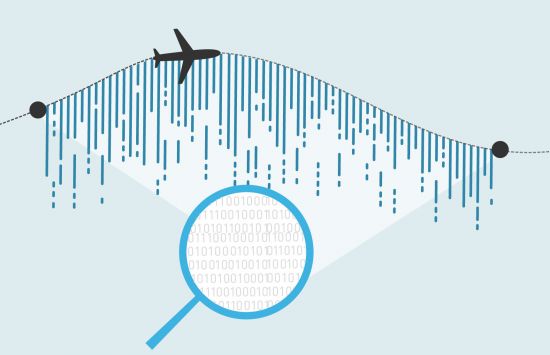 In today’s world, aviation has the well-earned reputation of being the most reliable means of transportation. It is widely known that safety is of the utmost importance in the aeronautical industry. In particular, aircraft operation and traffic management both have strong regulations in place in order to ensure safety, since these are the phases of air transport when incidents become of critical importance. Commercial interests, passengers comfort and protection, environmental problems and noise are among the list of things that must be addressed in the so-called tactical phase, or the phase in which aircraft are operating in real time.

Clearly, the safety of operations in this phase must be ensured by introducing avionics and aircraft systems responsible for measuring certain parameters. The possibilities of improvements and predictions can be simply inferred if flight data is monitored as aircraft are sailing the skies. As a consequence, a whole new branch of the aeronautical industry continues to grow and encourage the creation of teams and the development of systems that can record, analyse, and carry out data with pertinent actions. Specifically, we speak of the Flight Management System (FMS), which led to the evolution of Flight Data Monitoring (FDM) techniques and then, as part of stakeholders’ application, the Safety Management System (SMS).

The latter is defined within the corporate management system of a given company, as it defines the policies that the company itself is going to adopt in terms of safety and its management. Conversely, we shall see the FMS purely as an aircraft system. As a result, the FMS is going to depend on aircraft manufacturers. To look at the FMS through a different lens, what is its role in aviation safety?

The question can be posed in another way: are there any superfluous characteristics of the FMS as regard safety purposes? The answer is probably not. In short, the FMS is the major source of information on the aircraft for both the crew and the rest of agents in the air transport industry. First, the flight plan is loaded on it, including the intentions of the pilot, route, crew, weight, engineering variables, etc. Then, during the tactical phase, it is the same system that receives information from all sensors, data ports, and both analogue and electronic devices measuring something in general – this might include Pitot tubes, hydraulic pressure sensors, fuel mass measures, etc. In addition to this, the FMS displays the subsequent relevant information to the crew in the cabin by means of the Control Display Unit.

Besides all this, the FMS is able to load the received data into recorders so that huge amounts of information are available after landing. The resulting system is the FDM. From the moment data is recorded by the available devices on board, it can be extracted and treated in a statistical way. The proper treatment of this data gives rise to huge possibilities. Note the importance and sensitivity of the mentioned data. To have a clear view of the bigger picture, let us say that the FDM involves metrics regarding every parameter during aircraft operation, not only airborne ones. That is, it is possible to generate predictions and analyse the recorded data so that aviation evolves towards a safer, cleaner and wiser occupation of sky and airports.

Final steps and impact of the process

As we saw before, it is the task of the SMS to carry out and inform corresponding politics after receiving reports and analytics of the recorded data. Therefore, we can state that FDM is one input of the SMS of each stakeholder, even if the whole process of FDM is not run by stakeholders alone. Remarkably, the processes involving recorded data are not public at all as neither are the reports that are issued to the companies. However, the conclusions for safety improvement are public since every measure taken to enhance performance and security in aviation must be shared between all agents.

After the given brief overview of these systems, we may wonder whether the impact of these things in aviation is only important after regulations take place and a whole branch of the industry is started up or if the impact is also felt in a more direct way. As one example, is the crew of the aircraft affected at all by these factors in flight or are they only relevant for them when studying regulations and signing their contracts? The reality is that the FMS in particular makes the lives of pilots and crew much easier. Even the classical workplace of the “flight engineer” has disappeared due to automatization of its tasks in most cases.

All in all, the implementation of these systems represents a paramount decrease of the cabin workload. Eventually, these systems help the crew and controllers conducting their work. The systems directly enhance the safety of aircraft operation in real time, making us feel much safer and prouder of the way we have come until now, and increasing the possibilities of what may yet come.