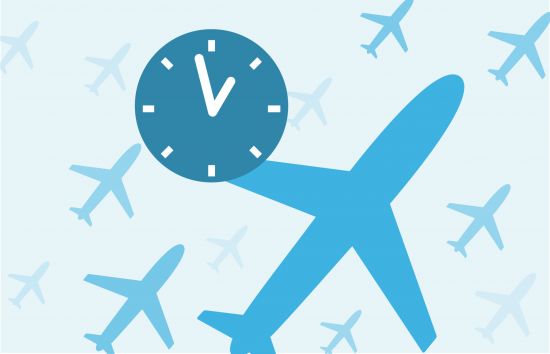 Risk missing a flight or waste time at the airport?

It is believed that George Stigler, who in 1982 received a Nobel prize for his achievements in economy, used to say: “If you never miss a plane, you’re spending too much time in airports”. Even though that sentence might seem counterintuitive at first, it was in line with his vision of optimum strategy of plane catching: Allowing yourself 1 hour of extra time every time you fly, just to be on the safe side, might result in spending 4 extra days at airports after 100 flights. For a frequent and productivity-oriented traveller, that trade-off might seem too much. Since Stigler’s time, airports have changed quite a bit: availability of electric sockets, Internet connection, better quality food, larger variety of shops and a number of other services have made waiting less painful (with some airports even offering art installations, movie theatres and wellness). However, it is difficult to imagine a frequent traveller or a time-conscious one choosing to wait at an airport for over 2 hours more as opposed to spending time at their beautiful holiday destination or indulging in that one sweet short nap in the privacy of their home.

In addition to that, one of the goals of Flightpath2050, a research agenda launched by European Union which provides Europe’s long-term vision for aviation, is that “90% of travellers within Europe are able to complete their journey, door-to-door within 4 hours”. Any decently frequent air traveller can observe how highly ambitious vision that is. After all, how many journeys can said air travellers recount as being under 4 hours, counting from the moment they stepped out of your house? Air travelling today still includes a fairly convoluted process of accessing the airport, checking in luggage, passing through security, boarding the aircraft and a number of other procedures which make flying more complicated than simply wandering onto a train that will take you to your desired destination.

Presented with such a time-challenging process, many travellers will decide to allow themselves enough time to get to the airport to account for uncertainties such as delays in public transport, traffic jams, long queues at the airport security, etc. That often results in long hours spent at the airport waiting for boarding to start. Admittedly, not every traveller will see this as a pressing issue. However, according to the 2017 Global Passenger Survey conducted by The International Air Transport Association (IATA), most passengers expect emerging technologies to minimise those time uncertainties and make them more in charge of their travel experience. Minimising them is not an easy task for a human. Finding the ideal time to leave for the airport presents a challenge even for a well-seasoned traveller, especially when faced with a new or less known city.

How much are you willing to risk missing a flight? Put a price on it.

As Jordan Ellenberg states in his book “How not to be wrong: The power of mathematical thinking”, the optimal arrival time to the airport is highly personal and depends on a number of subjective (and often difficult to measure) factors. To be able to quantify intangible processes such as annoyance with waiting, Ellenberg refers to utility theory from economics. Utility theory is, to this day, one of the most important theories in social sciences, and in its foundation is a model based on axioms of rational behaviour. Assuming that human beings will act as rational agents, their decision process will be such that it maximises their utility. The idea is that to everything in life we can attribute some kind of utility (which can be positive or negative), and in lack of a more appropriate measure, we can use an abstract unit called utils.

Using utils, we could assess that missing a certain flight costs a traveller 10 of his or her utils, whereas every half an hour spent at the airport is worth 1 of her utils. Furthermore, we could easily derive, using data mining techniques and frequentist approach to probability (by which probability is seen as a relative frequency in a large number of trials) that the probability of missing a flight when a traveller arrives 1 hour before the take-off time is 15%, and when arriving 2 hours before that probability reduces to 2% (These probability values are borrowed from the aforementioned Ellenberg’s book).

Hence, we can calculate the expected cost of arriving to the airport 1 hour before that particular flight as: 2 + 15% x 10 = 3.5 utils. For comparison, arriving 2 hours earlier costs the traveller more in this scenario: 4.2 utils. However, if I were a more conservative traveller or that particular flight was more important for me, I might say that missing that flight costs me 2 times more (i.e., 20 utils). In that scenario, the expected costs of arriving 2 hours and 1 hour earlier to the airport cost him or her 4.4 and 5 utils, respectively. That means this traveller’s preferred option would be the more risk-averse one of arriving to the airport 2 hours before the flight.

Now, the utility concept being a completely subjective one, it might not give us a realisable and implementable solution, but we can certainly draw inspiration from it. This example indicates that for a time-conscious traveller eager to spend their time productively, there might exist a personally ideal time of arriving to the airport. Consequently, there exists an ideal probability of missing a plane, and while it is very low, most likely it is not zero!

So, what time should you leave for the airport?

However, how do we derive that ideal arrival time suited to a particular traveller? Certainly, it depends on one’s willingness to embrace risk. Daniel Kahneman, a well established name in behavioural economics and another Nobel prize winner, argues that human beings cannot be seen as rational agents. We can’t ask utility theory to spit out an optimal time for arriving at the airport because its assumptions don’t apply to what we are trying to model: human behaviour. How do we then combine all this valuable knowledge gathered over decades of work by various economic researchers, psychologist, mathematicians and statisticians? We believe data science and artificial intelligence provide us with a pathway.

Nowadays, machine learning algorithms are being successfully exploited for user profiling, expanding their ability of learning about the users and their preferences, needs and habits. After all, Netflix builds recommender systems that can predict fairly successfully what show a viewer will binge-watch next; Amazon’s intelligent algorithms are creating their “mental maps” of a shopper’s habits and interests as a consumer; Youtube tries to predict what video suits one’s repertoire, and smartphones learns about our sleeping, eating and exercising habits. In the similar manner, they could be used to offer very personalised and optimally timed travelling procedures, taking into account a number of very personal features of the traveller. In addition to that, intelligent algorithms are more successful than ever in forecasting traffic jams and peak hours, queuing times at airport check-in counters and security areas, and other processes with a variable time component present in one’s journey to the airport.

If we were to build more realistic models to help travellers decide what time to leave their house, we would need to unify as many concepts as possible in order to provide users with an accurate and personalised travel guidance. Possibilities of what processes to model and in what way are numerous. Data revolution has enabled us to build individually tailored digital travelling assistant, and it can bring the 4 hours door-to-door vision of Flightpath2050 one step closer to reality by helping travellers fight uncertainty.

Are you willing to trust an algorithm that claims it knows you and your utility curve, telling you what time to leave for the airport? And if you take enough flights and eventually miss one, don’t despair – globally, your utility function is being maximised!