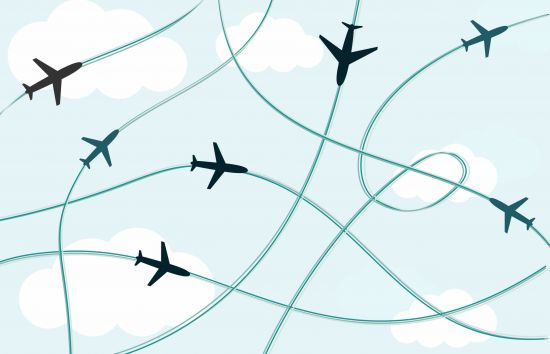 Towards a greener aviation, the role of Artificial Intelligence

Last 11th of December, 2020, during a European council session, coinciding with the 5th anniversary of the Paris Agreement, 27 EU members decided to set a goal of 55% of emissions reductions by 2030 (previously set to 40%). The final goal is to reach carbon neutrality by 2050.

What role does aviation play in total emissions? In 2016, aviation accounted for 3.6% of the total EU28 greenhouse emissions and for 13.4% of the emissions from transport. Of great concern with aviation emissions is its particular pollutants, which, in 2015, accounted for 7% of the global NOx emissions in EU. It is shocking to share that a one hour flight with 150 passengers burns 2700kg kerosene, resulting into 8500 kg carbon dioxide, 3300 kg water vapor, 30kg nitrogen oxides, 2.5 kg sulphur dioxide, 2kg carbon monoxide, 0.4 kg hydrocarbons and 0.1 kg PM. With emissions becoming a concerning issue, the European roadmap to tackle emissions reduction in aviation involves the following steps:

Finding ourselves in the so-called Big Data era, in which we are capable of stocking and analyzing large amounts of data, one question arises: what role can artificial intelligence have on the roadmap towards greener aviation?

The availability of large amounts of data (Big Data) is key in the use of artificial intelligence techniques; they can be used to find patterns and extract behaviors. Machine learning is capable of extracting behavior patterns from datasets, including historical flights, trajectories and events that may have an influence on flight trajectory. Through machine learning analysis, a deeper understanding of the air traffic system can be achieved, and this is key for more efficient aircraft operations as well as for innovating in the field of air traffic management systems. For instance, if an aircraft faces an unexpected event, such as turbulence, storm, traffic deviation or strikes, its route is modified. This modification may lead to inefficient traffic management due to uncertainty. Machine learning can be used to analyze similar historical events, detect a pattern, and predict, in real-time, the deviation to follow. This trajectory prediction is a major advantage in terms of optimization of aircraft operations.

To sum up, artificial intelligence is powerful tool that may help reduce emissions in the field of aviation. The challenge ahead is knowing how to use these tools correctly, taking into account all factors and all sectors that play a part in air traffic, from management and operations to external factors, and encouraging all these elements toward the same goal: greener aviation.