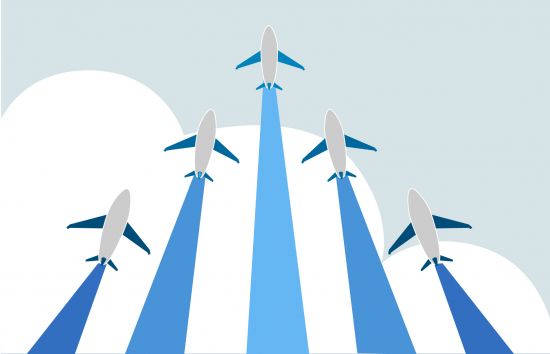 Aircraft engineering development has improved significantly in the last several decades. And though aircraft configuration, navigational systems or commercial pressures have changed accordingly, pilot training has remained the same. This training is not fully adapted to modern aircrafts in which automation control, flightpath guidance and monitoring, among others, are not currently taken into consideration to an adequate degree. Current aviation safety levels are very high and considered the safest transportation media, with just 0.035 deceases per 100 million person-kilometers (for comparison, motorcycling has 13.8 deaths). However, accidents still happen and following investigations determine human error as the main cause; according to Boeing, close to 80% of today’s accidents are caused by human error. In a way of further mitigating the risks, EBT has been proposed.

There are two types of pilot errors: tactical errors, which have to do with a pilot’s poor actions or decisions (fatigue or lack of experience); and operational errors, which are related to poor flight training or instruction. The latter can be mitigated by enhanced training programmes. Re-thinking training will lead to remarkable safety benefits. Training programs have to be restructured in order to face real threats to operations instead of facing risks that existed before. Is Evidence Based Training (EBT) the solution?

Evidence Based Training (EBT), sometimes referred as Competency-Based Training (CBT), has been supported by the International Civil Aviation Organization (ICAO), the International Air Transport Association (IATA) and by a group of airline industry experts. EBT consists of reducing airline accident rate through strategic review of pilot training and assessment of flight crew based on evidence. It is based on actual errors and safety data so that the pilot is instructed according to knowledge of current typical failures depending on the route and the type of aircraft.

A recent, relevant example is the QANTAS A380 accident in November 2010 due to engine failure. This might not have been seen as a challenge for the crew because they were used to being trained to deal with this type of failure after its occurrence. This time, engine failure resulted in an explosion with fragments damaging flight control surfaces, the cabin, fuel tanks, electrical systems and hydraulic lines. Mostly all systems were degraded at the same time. Was the crew prepared to deal with this situation? The answer is clearly no, as nobody had ever faced such an extreme situation, and thankfully the crew managed to make an emergency landing. If Evidence Based Training had been implemented, there would have been more opportunities to mitigate these risks by the crew beforehand.

EBT differs from traditional training in two main aspects: core competencies and evidence. Core competencies which are observable, measurable and include everything that a pilot needs to operate safely, competently and efficiently; evidence is the results from the analyses of global safety and training data. Another important aspect of EBT is the term ‘resilience’. In aviation, resilience refers to the capability of the crew to deal calmly and effectively with unexpected occurrences that do not deal with standard operating procedures. These unexpected occurrences, such as the example explained before, is what is called Black Swan Events. Black Swan Events are accidents difficult to predict, moreover pilot behavior is difficult to predict too.

To successfully achieve this system based on evidence, a large set of baseline data is crucial. This data includes pilot surveys, safety reports, flight observations and above all, flight data records and flight data analysis. Over the last several years, the availability of data covering flight information and training activity has improved significantly. Problems, errors, threats and undesired aircraft states are provided after this diagnosis so that airlines can make the decision whether or not to change how pilots are trained. Currently, Evidence Based Training is being progressively implemented, though it is not mandatory and flexible regulation facilitates addressing these problems. Airlines should implement changes incrementally and continuously measure if the changes implemented mitigate all errors. Implementing EBT is a complex and multi-year project. Each airline’s training program should be based on their routes, specific needs and risks. Training will be later on conducted in a full-flight simulator with high accuracy.

In sum, Evidence Based Training is definitely an effective way of adaptation for training programs as traditional ones are no longer as appropriate. Engine reliability and aircraft technology make events such as failures during take-off very rare and easy to solve. Moreover, the combination of skill, knowledge and attitude ensure a competent pilot. These are the abilities training should focus on. Is it time to change?