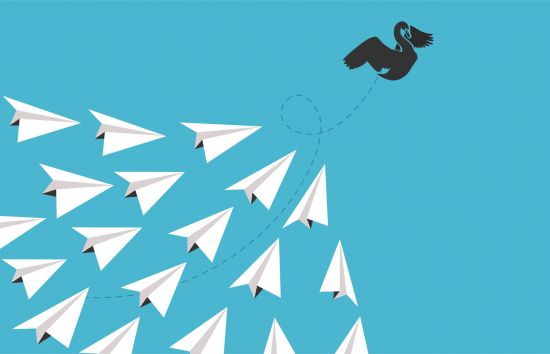 A black swan for the aviation industry

A black swan, as defined by Nassim Taleb in his influential The Black Swan: The Impact of the Highly Improbable in 2007, is an outlier outside the realm of regular expectations. No historical data can point to its possibility; as such, it can be extremely impactful. Taleb’s third characteristic of black swans is their tendency to be understood only through manufactured explanations by humans in an attempt to make them explainable and predictable.

Mr. Taleb mentions that social scientists have stretched the furthest in their explanations in the past, operating under the belief that their tools could measure uncertainty. However, black swans should be accepted as difficult to predict, and rather than trying to predict them, we should accept our limitations and focus on prevention. Though we tend to credit prevention less than treatment (who remembers the bankers trying to avoid a recession as much as those who help after?), aviation necessarily prioritizes safety – as a society, we need to trust flying, and we have learned through the terrible impact of a lack of safety.

Innaxis, together with a group of talented partners, worked from 2010-2016 to integrate complexity science into the management of air transport. We studied how uncertainty could be measured, reliance managed, and how different tools could allow the community to better prevent undesired events. Resilience itself was a very popular topic of research after Eyjafjallajökull blocked air transport for several days in 2010 after the eruption of its volcano.  This was thanks in great part to the recommendations of Eurocontrol and others that recommended and regulated avoiding flying in certain areas during the eruption of the volcano.

But techniques to evaluate disturbances and techniques to mitigate impact are not necessarily rewarding enough pursuits to motivate researchers, mangers, financiers to make hard decisions in time to avoid major catastrophes. Case in point, during our current Covid-19 pandemic, a strong, coordinated international action might have potentially saved thousands of lives and prevented a global recession.

Next time, hopefully, we will improve our preventative approaches. For now, it is time for people with optionality, as Taleb explains in his following book Antifragile: Things That Gain from Disorder in 2012. Are you among the people with options?