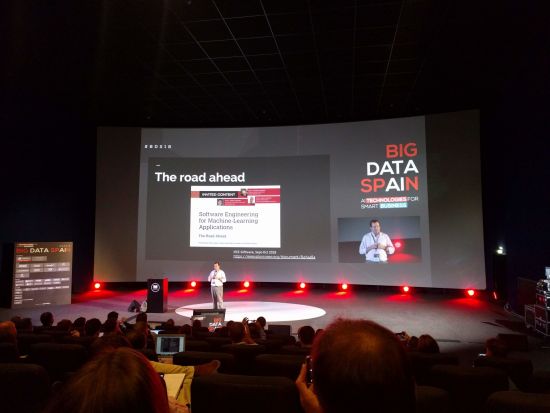 The data science team at Innaxis attended the Big Data Spain 2018 conference to learn about the latest development in data processing and improve our data processing skills. It is the biggest Big Data event hosted in Spain and with almost 100 speakers participating in 80 different talks. Although the conference is mainly ICT, many talks could apply to aviation as well, both to identify potential business cases that can be also applied in the aviation ecosystem, but also to improve the data processing stack to process more data and get results faster.

The most interesting business talk was one presented by Cabify. There are two key performance areas of interest in their business model: One is to maximize the revenue of their drivers and the other is to have an optimal match between drivers and the riders (clients that want to be have a ride) that minimizes waiting time for both sides.

What makes the approach interesting is that they made their ETA prediction model from scratch instead of using commercial API ETA solutions. They map their service area in hexagonal cells and each ride is tracked and stored in the data platform. The historical data is used as input to train a deep learning model that generates journeys from one place to another to make predictions. Using hexagonal cells provides some handy semantic features that raise the performance of the prediction in several times, using rules like collocations in natural language processing. Also, it infers knowledge by creating clusters of nearby areas and identifying main roads, most taking directions and catchment areas in minutes.

This approach could be used in aviation in several ways, such as to manage airport passenger flows, but also to apply optimal 4D trajectories in airspace. This is only one single example of ideas that were shared at the conference.

Interested in the more technical details? We will cover the technical talks in a future blog post. Stay tuned!