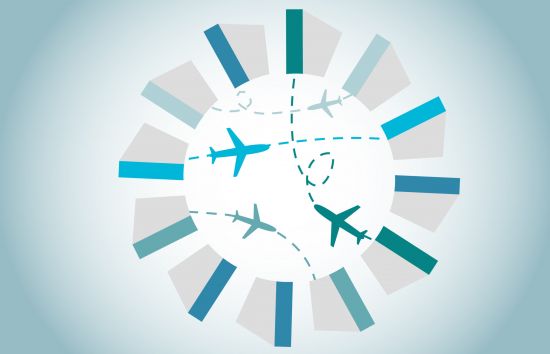 Domino is coming to its end!

We have entered the final weeks of the two year long SESAR project, Domino! The objective of Domino was to assess the coupling of various ATM subsystems from a flight and passenger perspective by modelling and analysing the air traffic network effects of three novel mechanisms: 4D trajectory adjustments, advanced flight prioritisation, and flight arrival coordination using extended arrival manager.

The final product of Domino is an agent-based model of the whole ECAC air traffic network. It is a data-driven stochastic model that relies on an extensive number of different data sources to simulate the traffic conditions as realistically as possible. In addition to flight data, the model uses data on passenger itineraries, airports, aircraft performances (BADA), weather, flight routes, ATFM regulations, and many other sources. The model was calibrated and tested on one full day of operations, covering around 25,000 flights. The mechanisms were simulated across various scenarios, generating a very large set of results (more so due to the stochasticity of the model), on which a very exhaustive data analysis was performed.

What are those mechanisms for?

The concept of the 4D trajectory considers time to be the fourth dimension of trajectory, integrated with the three spatial dimensions. Therefore, 4D trajectory adjustment (4DTA) allows not only for adjustments of aircraft level or horizontal position, but also of time taken to execute a trajectory. For example, such adjustments can be performed by changing aircraft speed with the intention of meeting the planned arrival time.

Due to shared resources that inherently exist in an ATM network (aircraft, crew, passengers, etc.), operational distortions suffered by one flight have the power to affect other flights in a “domino” like effect (hence the project name!). Consequently, such propagation can bring the network to a less-than-optimal or undesired state. Two different 4DTA concepts have been explored in Domino with the goal of protecting the network from such effects: dynamic cost indexing (DCI), which enables a flight to adjust its cruise speed to mitigate the expected delay (partially or fully) and preserve scheduled arrival times; and wait for passengers (WFP), which aims to preserve passenger itineraries by waiting for delayed connecting passengers.

The second mechanism implemented in Domino is flight prioritisation (FP), which aims to reduce the cost of delays by slot reallocation. The cost structure of a flight is typically not linear due to the presence of different constraints imposed on each flight, such as crew out-of-hours constraints or maintenance slot requirements. Delay of a flight can potentially break some of those constraints and impact airline users’ (AUs) operational costs. To mitigate such impacts, AUs could prioritise their flights in order to redistribute delay on the basis of the consequences on operations and costs. That prioritisation can then be used to inform decisions when allocating slots to flights.

The final mechanism is flight arrival coordination (FAC). The main objective of this mechanism is to coordinate arrival traffic while ensuring runway throughput is maximised and the amount of expensive holding at (Terminal Movement Area) TMA is reduced. The ATM Master Plan introduces the concept of E-AMAN (Extended Arrival Manager) as a planning tool for those activities. Generally speaking, E-AMAN has two horizons of activities: AMAN planning horizon (which can be as large as 500 NM, as with Heathrow) and AMAN advisory horizon (set at 350 NM for Heathrow). When a flight enters the planning horizon it is  accounted for by the E-AMAN system and, once it reaches the outer bound of the advisory horizon, a speed adjustment is reported to the controller so that the flight can be slowed down in order to smooth the arrival traffic and start building the arrival sequence. Domino explored current implementations of FAC and the possibilities of including some airlines’ input on the sequencing optimisation along with different techniques.

Image 2. The extended arrival manager concept (E-AMAN) allows for metering traffic into a Terminal Movement Area (TMA) from an airspace further out than when relying only on AMAN. E-AMAN is already implemented at London Heathrow airport. Image from: https://www.harris.com/solution/orthogon-extended-arrival-manager-e-aman

How do agents in the model make decisions?

The decision making was simulated and analysed across three increasingly complex implementation levels. The baseline level was intended to capture current practices in air traffic management, whereas the other two levels adopt more intelligent decision-making methods based on available data. In order for the agents to make as informed of a decision as possible, various effects and constraints were modelled: crew and maintenance constraints, preservation of passenger itineraries, reactionary effects, airport curfews, etc. For a more detailed insight into the complex agent-based model that the Domino team developed, click here (warning, it’s quite lengthy!).

In general, we have observed that these mechanisms can be a powerful tool in delay mitigation and minimisation of an airline’s network wide cost. Various scenarios have been simulated, capturing both separate operations of each of these mechanisms as well as conjoined performance of various mechanism combinations (across three levels). Moreover, we ran simulations in two different environment with respect to delay levels in the network: a nominal level of delays and a stressed environment in which the expected delays in the network are larger than on an average day of operations (e.g. due to some network-wide disruption). The Domino mechanisms proved especially useful in the stressed scenario, sometimes significantly reducing an airline’s costs when compared to scenarios with no mechanism used.

While these mechanisms provide especially beneficial solutions to airlines through cost management, they don’t necessarily have a positive impact on passenger experience. Many passengers in the model experienced an increase in delay when more advanced mechanisms were employed, especially passengers who didn’t have any connecting flights in their itineraries. That is most likely due to the fact that the WFP primarily takes care of connecting passengers. Such trade-off between passenger-centred and flight-centred metrics might be inevitable and should be a topic of further debates when implementing decision-support systems such as this one.

This was only a very short overview of the insights that the Domino team obtained. If you are interested in the whole story, keep an eye on the official webpage where we will publish the final findings and a number of interesting advanced case studies in only a few weeks, and where you can already find results of the preliminary investigative case studies.