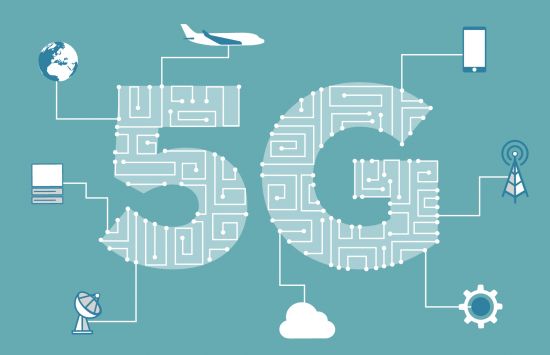 Could the 5G technology lead a disruptive change in aviation?

5G is the latest standard for mobile internet connectivity. The first specification was released in late 2017 and, since then, 5G has continued developing. Most mobile carriers have already deployed these networks in selected locations in order to test their real performance. Now, we are approaching the first commercial launch as early as 2020. How can this new standard expand the possibilities of new aviation scenarios? Let’s examine its features in detail.

This new standard supports very high bandwidth (up to 20Gb/s) both for sending and receiving when combining several network channels. These channels should coexist in the millimeter wave range (from 20GHz onwards) instead of the default microwave range (800Mhz-6GHz). They can also be up to 400Mhz wide instead of 20Mhz wide, as used in 4G. This is one of the reasons why these channels can support such a high capacity of data. However, those channels suffer from high signal attenuation and low penetration, so the signal coverage of a single cell is reduced to the order of hundreds of meters as opposed to kilometers.

The performance of 5G networks is not only improved using new frequencies: 5G could work also on the existing microwave frequency spectrum (800Mhz-6Ghz). Now, 5G can deliver messages even if the receivers are in a high congested area, as more cells are supported in the same area to connect users. As these messages include less data overhead, the message is received earlier. Additionally, message data is transmitted using most of the available resources – i.e., combining more network channels than ever to increase the available bandwidth for sending and receiving.

One of the reasons why the Drone ecosystem has not fully developed yet is that they cannot work on internet networks. No standard network, up until now, has combined low latency rates with high density networks. Now, both are supported on 5G networks.

With 5G, Drones can operate through very low level airspace in order to provide services to citizens. Those drones can be piloted from any central location by connecting said aircraft systems to the internet through a 5G connection. Command, navigation and tracking services are performed by exchanging messages between the aircraft and the remote control using a 5G data link. 5G networks are fast enough and provide enough bandwidth to support delivering multimedia input from aircraft sensors in real time. In the past, this scenario was impossible, as the latency with 4G networks was not low enough between messages.

Additionally, drones will be able to be controlled either as single entities or grouped if all of them perform the same task. These drone groups, called swarms, and inspired from biology, define some simple interaction between members in order to achieve a shared goal. Those drones can be connected to the internet using 5G in order to support the simple interaction among members in real time and in order to update the task plan if the task changes.

In the future, drones could be used to provide various robust services from civil surveillance, delivering mail packages from distribution centers to the clients and providing personal mobility services. However, drone swarms are required for most of these advanced services, as the coverage range of single, standalone drones is too short.

Airspace users have their own equipment with sensors, either on-board or as ground devices. These sensors collect data from the airspace and the attached elements in order to make management decisions. But aviation data is usually not exchanged between different data owners. There is a custom data acquisition process that makes the data exclusively available to the data owner’s staff.

There are some proposed solutions to increasing data sharing among users, such as SWIM. These solutions have a low adoption ratio within airspace users as they must sync data from their premises to a central server, limiting the process to their own pace of data syncing and transmission. This not only disables real-time monitoring but also makes data analysis harder as time windows have to be synchronized in order to provide system analytics with fused data.

Previous mobile internet networks have not supported IoT scenarios by default as the connection never proved reliable enough in congested areas such as big airports and populated cities. As a result, airspace users sync data to their local networks first using either wired or wireless links. As such, they are not engaged in making their data public as they are not sure if they will have data from other providers in time to perform their analytics, so they share the minimum amount of data required by authorities.

There are several data sharing platforms already offered with different purposes. Though some of them are for research and development, such as DataBeacon, the one used by Innaxis, there are others used expressly for maintenance (AnalytX) or for sharing data to the authorities (SWIM, as referenced above). 5G networks enable data sharing in real time to central servers instead of necessitating middleware through local networks. That’s a real improvement over existing data, as it can be used for operational management as well as for planning and business development as previously applied.

We have evaluated how two different innovations proposed for the ATM system can be enhanced using 5G networks. Insufficient technological support limited the pace of development of those solutions. 5G networks are designed to offer machine-to-machine interaction by design and its features really enable a faster development of those two examples. Let’s see more examples that can be enhanced with latest network technologies in upcoming posts. Stay tuned!